At the wreckside
We approached the wreckage from the starboard side, midship just below the main armor belt. The first hours at the wreckage were intended to explore the overall condition the ship was in.

Then it was time to activate Elwwod and Jake, our ROVs (remote operated vehicles). We landed on the main hanger of the ship and utilized the ROVs to explore the interior of the hanger. To our surprise we found the remains of two of Bismarck’s aircrafts (Arado 196). One of the aircraft was taken apart and mounted to the rear wall of the giant hanger. The other one was badly damaged except for parts of the fuselage and wings.

Although we spent several hours at the wreckage the time appeared much to short before we had to begin the ascent to the surface. Unfortunately, the rather stormy weather complicated the recovery of the submersibles. The 45 minute lasting bumpy ride in the submersible on the surface was nothing for a weak stomach. 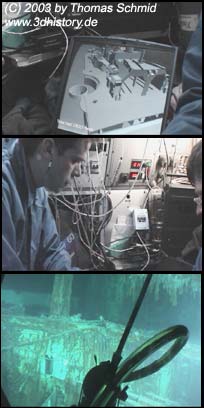